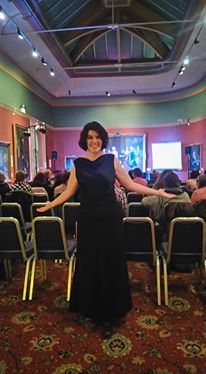 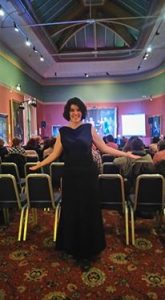 On arrival in Wolverhampton I was directed to a pub where I could have a pint at eat my own food. Genius. I had made a big chicken pasta salad for train but had felt too early to eat it. Took my cheap Tupperware into the Lych Gate Tavern.

I went to The Slade Rooms to see Bob Beagrie and his team perform Leasungspell.

I loved it. They were all so accomplished and the event was like nothing I have ever seen before. Check Bob and Leasungspell  out further here: http://www.leasungspell.com/leaacutesungspell.html

I then sneaked my way into the dressing room to tell Jonn Penney I wished I could stay but was hosting at another venue. The tracks of my being fourteen played in the background as I grudgingly packed my stuff away. I am going to send him a beer mat with my A Bit Like Falling in Love poem. 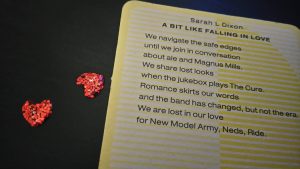 The staff were helpful and the venue was beautiful both visually and acoustically with an arched windowed high roof. There was plenty of space for books to be spread out and the space was almost full by the time we launched the event. My only complaint would be that we were not given advanced warning that the bar would be closed before half time break and I think a large number of the audience would have bought more beverages at the beginning had they known that.

I loved the fact Polly and Heather brought instruments along with them. The acoustics of the room were stunning. Lines that stood out were ‘Her body is an echo box. She does not own defeat.’ Loved the description of the mother ‘lips tight at some imagined slight’ and tree-climbing was ‘strictly forbidden in her straight back.’

Holly asked us Do you think David Bowie would like my trousers?. Then she introduced a contrast at the food-bank where ‘the edge of the desk bites hard into my soft belly.’  No link available.

Nina posted a detailed blog within twelve hours of the event including photos.  Wow! The idea of going away together to say Goodbye when a relationship ends and when ‘the Lake evaporated, just like us.’ Arthur Rackham. I just rediscovered an Oliver Twist book last week with his plates in and love our family edition of Christmas Carol with his illustrations in it, so particularly enjoyed this one for personal reason too. ‘The King of mischief wears no hat as they beat their feet against ground, change the earth’s vibrations.’

Leanne handed out fruit to anyone who had heard of Veganuary. The second part of Leanne’s set was observations of a cyclist such as the woman here: ‘she always waits on the same bench, in the same coat the colour of beetroot.’ and ‘walk tremendously in the tracks of the bracken.’ Both these lines are from here debut poetry collection a 200+ page epic poem on cycling around Coventry, Confessions of a Cyclist.

Tom talks of resignation as ‘holding the clock’s hour hand in my fist like a knife.’ and told us a story about Uncle Phil ‘he wasn’t really my uncle, but then he wasn’t really a dartboard either.’ And then his poem The Evil Eye: ‘You wouldn’t expect a key/to leave its shadow behind/when picked up off a table/ but that is happening now to you online.’ Find the entire poem The Evil Eye here: http://internationaltimes.it/the-evil-eye/  Find Tom’s Website here: https://thomasmccoll.wordpress.com/

Heather tells us she ‘was soap sud soup with beer bottle croutons’ and plays the accordion song Vacuum cleaner tuner as she attempts to tune the gallery carpet while you were there, as she says, this ‘is not a common art’.

Gerry’s Bling Trilogy is always a pleasure. From Tiffany Bling ‘boys screaming and falling apart. Doesn’t know much about art, but knows she doesn’t like it.’ and Jimmy Bling ‘ Pure as lust and distant as love,. Gloves off and furious.’ Grandma Bling ‘everyone shady is laughing, everyone’s baby is laughing. And she prays her lungs can make it.’

Jess, so many of her lines grab me so I will just share a few from Sleepless in Newcastle: ‘the fragile faces of fear covered for just a few seconds longer’ ‘our bodies stop screaming for the touch of something comforting.’ And from Fifteen – ‘already able to contain the history of earth in his guts.’ ‘consumed the world and pumped out the shame.’

Both the lines that held me most strongly in Kathy’s work were from here first collection, Book of Bones: ‘Visit me on Mondays, hear my echo/write to me from time to time.’  ‘There must be blood in a house this old’. ‘no sign recalls the distant killing/ brought to her front door/ by men in hats.’

In The Black Country Resistance poem ‘the dead, dragging hours are forgotten.’ and ‘feasts and grows fat, as best they can, on the memory and the taste of the promise of dreams.’ And from his new poem that had a title so long he couldn’t remember it:   ‘looks the wrong way at the right moment.’ And drunk people are described as ‘spectacularly spangled.’

I owe the crowd-funders another massive Thanks for making this event happen and those who took part in throwing words at me for the poem-a-thons when Wolverhampton art Gallery lost the funds ear-marked to pay performers fees for Wolverhampton Quiet Compere. 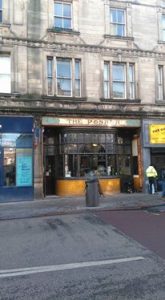 I shared an ale with Gerry and Emma at The Posada after the event. It is always good to have poets to share the post gig buzz with, especially when I returned home and it took me an hour to remove my second contact lens. I could watch cross-eyed as Facebook continued the giddy buzz as performers from the event sent each other love and compliments on sets and made new friends.

On the Saturday morning I asked directions to ‘Wightwick Gardens’ and the locals looked amused – I had pronounced it whitewick. After I read through a leaflet about the property I realised the knowing look was “Ah! Not a local!” humouring. The place was ‘Wittick Manor’. I met the same lady who had given me directions on a bus back in to town two hours later and smile and said ‘I know how to pronounce it now.’ So many friendly, chatty people on the buses.

Other highlights of the festival.

Win Saha and Bert Flitcroft – poetry with tea and cake.

Black Country Voices: The Nailmaker’s Daughters and Dave Reeves and his harmonica – here the performers were all a joy as was the venue.

Before I left on Sunday morning I was treated to Seven Wonders by Laura Liptrot, a retelling on Henry VIII and his six wives with props from the modern world and humour. A most enjoyable end to the weekend. I felt all the events I went to were a huge success and wish the WOLF luck in accessing funding to ensure an event happens in 2018.