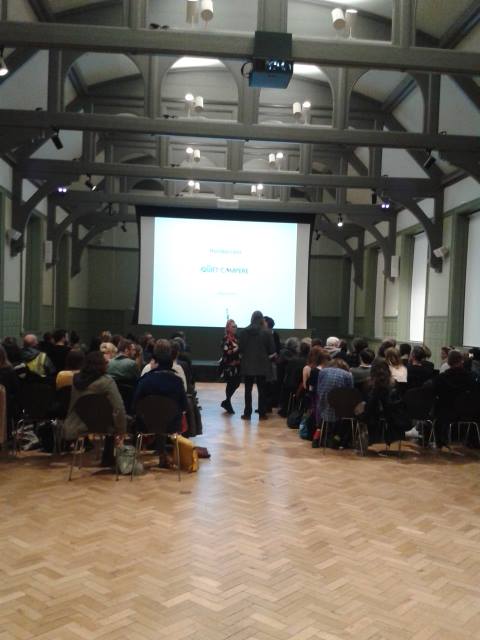 Posted on 3 March 20164 March 2016 by Sarah Dixon Writeups
Firstly, massive Crowd-funder thanks and shout-out to Mary R Crumpton who could not make it on the night.

Secondly, a Big Crowd-funder hug to all that have supported to make this happen.

I planned a workshop and made suggestions of art-work and how attendees could use it to create a piece, pointers rather than directions. I wrote two pieces in this time and performed them both on the night. One was in response to a Greenhouse with words on the outside and light shining from within and the second was in response to a piece that was a map, but if you looked carefully the contours made up names at their highest points.

The Grand Hall lived up to its name with tall ceilings and windows and a screen with Quiet Compere logo on it. We even had a stage for me to attempt to fall off between introducing performers! Many of the audience were not regular poetry goers and had positive feedback and said they will go to poetry events again.

Reece Williams:
Reece told us ‘spin doctors still have my dreams on quarantine’. and that ‘I was already spent on grief. my web of mourning was already drawing’. Also the phrase ‘arsenal of ambition’ was a powerful phrase when used in a poem about a young black boy who was killed.

copland smith:
copland treated us to three art-themed poems. From copland’s piece, How to paint a poem: ‘first you hammer out the framework… …as if you’ve never seen the world before. Do not let people watch, they will say that world does not exist.’ and the ‘brushes dunked in clouded spirit.’

Anna Tuck:
Anna was assured and cheerful and made me cry with her poem about wanting more from lovers. ‘I don’t want to be one part of a roving eye.’ and ‘I want to be loved up full, made whole with you halves.’

Ken Evans:
Ken performed a response piece to an Edvard Munch woodcut (1899) ‘The Lonely Ones’ from The Whitworth collection – which depicted two people on a beach looking out to sea.
‘The only man-made thing seen/from space is the distance/between a man and a woman’ ‘she…shorn of understanding as the stone/that holds him.’

Ken Evans first collection ‘The Opposite of Defeat’, is due out with Eyewear in September.

Leanne Moden:
The promise in Leanne’s line ‘If you need me to I will lace my fingers to build your first step up.’ This is an assurance we could all do with sometimes. ‘we’re luminous with ambition.’ And Leanne talked of listening to music and it being a way to ‘take breaks from the aching of everyday lives.’

Kate Bendelow:
I particularly liked the lines about ‘catch the wind and smother it until it is barely a cough.’ and in the poem My Girls a parent being as ‘pliable as Playdoh.’

Simon Howarth:
Simon’s ‘First Date’: ‘He cuts his pie as if his Mum’s watching.’ and his poem You’ve been to Bali, but you’ve never put a cigarette out on your arm. always gets me. ‘You’ve never seen the city from a bird-high lip.’ ‘cried yourself inside out watching the sun set and rise and set again … maybe if you had you’d feel more alive.’

Kate Garrett:
I knew Kate would take us into worlds of fairies and magic. She didn’t disappoint:
‘fairytale blooming / in the scrape of her nails / against my cheek.”, ” I love the alliteration and rhythm of: ‘we’re months and miles away from Monday night.’ and “And if the truth / had a bouncing soul / like my best pair of boots”

Editor at: http://threedropspoetry.co.uk/
First collection ‘The Density of Salt’  http://www.indigodreams.co.uk/kate-garrett/4591581784

Hannah Mackay:
From Roast Potatoes ‘For you, walnut tart is an act of devotion; I need more explicit expressions of emotion.’ ‘ and in Lavender – about parenting “Cross little boy, Red face Curly hair…I’m searching for something, Something I can give you; I can give you The smell of purple.”

Melanie Rees:
Mel gifted us a Lowry poem ‘with a tick-tock beat inside my chest, I understand Lowry’s need for vagueness.’ ‘so he painted love in the red of his matchstick men.’ ‘at shift end, going home to dance.’ I am entranced by the idea of holding a wasp: ‘I held a wasp. I wanted to hold the sun – one time.’

This was a large venue with an attendance of around 100, high ceilings, a mic, overhead projector, stage and ten performers.

The next event will be at The Nutclough Tavern in Hebden Bridge, a much smaller venue, cosy and beautifully decorated on a smaller scale. There will be no stage, possibly no mic, definitely no need for overhead projection. There will be ten poets, an appreciative, if smaller, audience and a compere who enjoys the differences between venues and settings as much as she enjoys the variety in the performances and audience sizes.