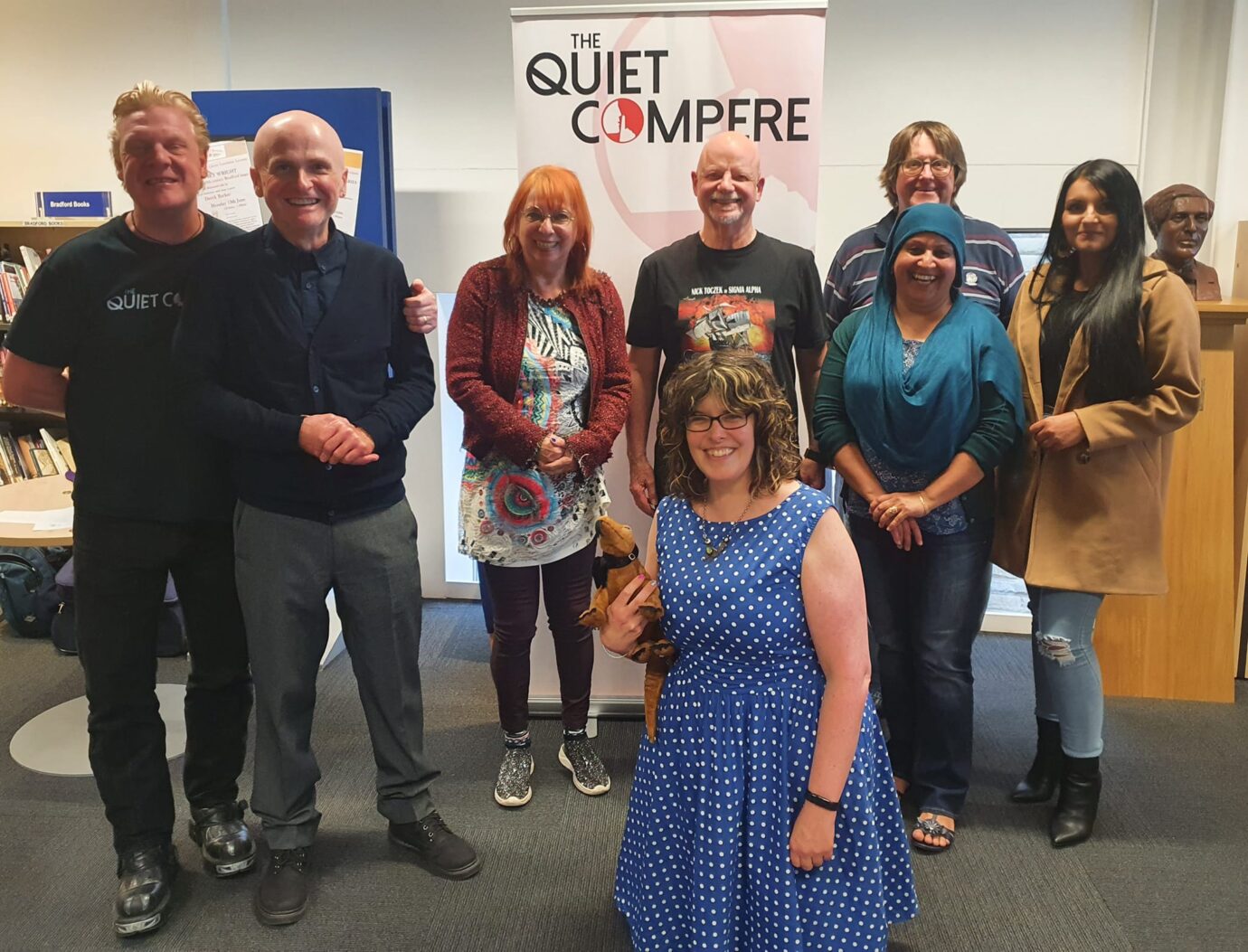 The venue often feels like an extra performer. Bradford City Library (hosted by the excellent Dionne V. Hood) was no exception to this. They provide a cosy space between the shelves and a bust of Humbert Wolfe, a locally famous poet.

We had a good turn out for both the workshop and showcase event despite Arriva bus strikes. Two people from the workshop had never written poetry before and one attendee read the poem they wrote in the afternoon in the open mic section of the evening.

On the open mic Maz dedicated each of her four short poems to women in the audience who had been part of her writing journey which started in the last year or so. Yazmin read us a piece about quiet words and ended with ‘silence’. Steve shared a moving poem about how ‘the guys in here say I was born sad… I was born happy.’ Kellie gifted us a haiku.

Steve was an excellent co-host and even invited me along to his workshop in the morning at the town hall and introduced me to the massive hot chocolates and Manchester tart at Café. Steve dedicated his poem Carrot Girl to Eileen Lumb and his mum. I enjoyed the defiant celebration of ‘We are people. We are here and we abound.’

And genius rhyme-play from Party to it:

Desires and designs on you

As your mates dance on the sofa

Because your folks are in Corfu’

from collection, Extrano (from Flapjack Press who have a Spring sale on until 30th June).

I enjoyed the rhymes ‘nervous/epidermis’ and alibied/inside. Trevor also read a positive and hopeful poem about health, ‘give me ten more years and I’ll think I’ve got a bargain.’

There was such compassion in the poem Some Men, especially the lines ‘they remove slugs so you can be comfortable… Some Dad’s…create new stories each night, they teach you how to grieve the loss of failure and how to ensure victory.’

The phrase ‘don’t cramp her into a tiny jar of your expectations.’ ‘let her sing in the spring and dance in the rain.’ Such gentle and seemingly simple freedoms.

Nabeela performed a poem in Urdu with no translation and instructed us if we didn’t know the language we could enjoy the music of the sounds. This surprised me and made me think. Loved the fact Nabeela did not feel any obligation to share a translation.

I love the sad rhythm in the line ‘midges mass and mingle. We stay single.’ ‘Choke on your own hat/ charge you VAT’ made me smile. And the ‘ripples on love’s lake’ in your vibrating hotel rooms poem.

Sharena shared a strong set of poems and particularly emotive lines were ‘Every planted seed is picked before it can blossom.’ and Sharena talked of sometimes being ‘just seen as a tick box in other people’s lives.’

Music seems to be one of the themes of Kathleen’s set. A rock n roll poem talking of ‘signing autographs on soft-skinned groupies’ and ‘how to stack a never-ending arsenal of 45s’. This reminded me of the time I found out I could load up more than one 45 and the Dansette would play them after each other. There as such tenderness in Kathleen’s poem about teaching her parents to twist ‘if twisting was their only foreplay I would have never been conceived.’ And in Things clouds get up to, ‘conjuring kidnapped mists into foggy lovers.’ A varied and strong set.

Photographing David was a challenge because of how active he is. ‘a human goldfish, insanity season and the madness in bloom.’ I loved the 80s references in I want to be bionic – muppets, Dusty Bin ‘The Ceefax of all knowledge’. I remember following soaps and jokes in Ceefax. And from Barstool know it man ‘He’s welded up the Titanic. Been a Formula 1 mechanic. Tamed a Bengal tiger and didn’t panic.’ This guy is referred to as having ‘done everything and been everywhere’ whilst in reality he’s never left the pub.

The next Quiet Compere gig is Wolves on Friday 1st July…

The convention is for Dave Pitt to say how he’s a performance poet, playwright, a third of the Poets, Prattlers and Pandemonialists, a fifth of Stories From the Smoke Room, Arena Theatre Associate Artist and Shouty MC and then go on about winning awards and stuff. But conventions are just there to make you feel comfortable and sometimes, it’s nice to get out your comfort zone, ay it?

Mogs mostly writes, what he laughingly describes as, ‘humorous poetry’.

He regularly performs at open mic events and is a member of 2 writing groups based in Stourbridge in the Black Country.

He has had 2 books published by Black Pear Press.

‘Poems Your Parents Won’t Like’. Which is aimed at the younger reader, but should be safe for adults to read if supervised by a responsible child.

‘Griff’ – a children’s novel about a stone dog that comes to life.

Casey Bailey is a writer, performer and educator, born and raised in Nechells, Birmingham, UK. Casey is the Birmingham Poet Laureate 2020 – 2022. Casey’s second full poetry collection Please Do Not Touch was published by Burning Eye in 2021. Casey’s debut play ‘GrimeBoy’ had a sold out run at Birmingham Rep in April 2022. He is a Fellow of the University of Worcester and in 2021 was awarded an honorary doctorate by Newman University.

Alex Jakob-Whitworth is based in Cumbria, near the Lake District (but up on the fells, where there is more wind).

The first poem she “performed” was at an open mic, written on the back of an envelope an hour before – truly! Alex attended a series of workshops during lockdown – was hooked and hasn’t stopped scribbling since.  To someone who talks too much – poetry is a welcome channel.

She enjoys the arrival of voices in her poems, the natural world; enabling near mythology to step in, and letting the pen go for a walk.

Having ventured onto the spoken word stage just 3 years ago, she has gone on to become a multi slam champion, poetry headliner and placed 3rd in the UK SLAM championships in March earlier this year.

Her emotive body of work explores love, identity, mental health and motherhood through the lens of a British Asian female. Prepare to laugh, cry and have your heart break.

Gerald Kells is a poet from Walsall, sometimes serious, sometimes funny, sometimes thoughtful, sometimes all three at once. He has performed in a number of slams, including winning the Shrewsbury Festival slam. He won the Sandwell leg of the ‘Stay Up Your Own End Competition during lockdown. His work has also been included in a number of magazines and anthologies and has published a collection of 51 Poems (called 51 Poems). He has a YouTube channel as well as poems on Soundcloud. He also likes walking, gardening (after a fashion) and going round art galleries to get inspiration.

Emma Purshouse was the first poet laureate for the City of Wolverhampton.

She’s a poetry slam champion and performs at spoken word nights and festivals across the UK.

Appearances include, The Cheltenham Literature Festival, Ledbury Poetry Festival, the Edinburgh Fringe, Latitude, and Womad. She has been a support act for John Hegley, Holly McNish and Carol Ann Duffy.

Her children’s collection ‘I Once Knew a Poem Who Wore a Hat’ (Fair Acre Press) won the poetry section of the Rubery Book award in 2016. Her collection ‘Close’ (Offa’s Press) was shortlisted for the same award in 2018.

Her debut novel ‘Dogged’ is published by Ignite Books.